Ethereum bulls should prepare for a price rally towards $2,000 in the next couple of weeks/months, per a recent analysis provided by Jebb McAfee.

The independent market analyst spotted a flurry of upside fundamentals, ranging from Ethereum’s growth as a decentralized application server to its rising search volumes on Google, before deciding to go all bullish on the world’s second-largest cryptocurrency.

Meanwhile, Mr. McAfee also mentioned Bitcoin, Ethereum’s contender for the top spot, as the primary catalyst behind its potential bull run ahead. He highlighted Bitcoin’s growing dominance as a leading indicator of Ethereum’s upside move, citing how a drop in the top cryptocurrency’s market capitalization in December 2017 paved the way for ETH/USD to establish an all-time high of $1,419. 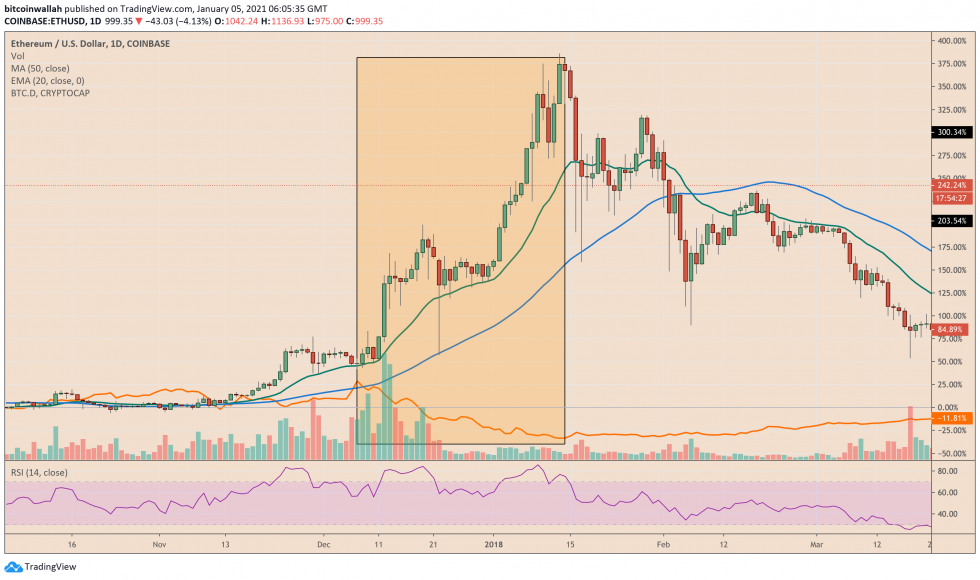 A drop in Bitcoin dominance in 2017 followed an Ethereum price rally to its record high. Source: ETHUSD on TradingView.com

The pair’s reactive rally—as Mr. McAfee hinted—was partially psychological. A wild upside move in the Bitcoin market prompted traders to explore the next-best cryptocurrency. Ethereum benefited from it majorly in December 2017. And it expects to repeat the fundamental fractal in 2021.

“I believe Bitcoin going through a massive rally is building trust among the investors in a bull market,” asserted Mr. McAfee. “And that trust is going to flow over [into Ethereum] and its rally itself.”

The statement appeared as Ethereum underwent a massive upside push. The cryptocurrency surged almost 60 percent—from $730.97 to $1,168.99—in just three days of trading as the Bitcoin Dominance corrected lower. Most recently, ETH/USD was trading 15 percent lower from its session high.

Mr. McAfee also favored Ethereum’s $2,000 target based on its prominence in the decentralized finance ecosystem. The analyst noted that growth from DeFi protocols would eventually flow into the ETH token, just as Google’s search engine benefits from the growth of the entire tech sector on increasing query volumes.

“We are going to see the same thing over the next 5-10 years as Ethereum continues to develop different projects that are going to lead the adoption of the ETH coin inevitably,” he explained.

The current trend reflected a rising interest in the Ethereum ecosystem. The Google Trends search volume for the keyword ‘Ethereum’ attained a perfect weekly score of 100. It reflected that more and more internet users—including potential retail/institutional leads—have looked into the cryptocurrency last week.

Meanwhile, the keyword score reached its best levels in the last three years on a five-year timeframe. That further raised ETH/USD’s probability of resuming its uptrend after the latest bearish correction.